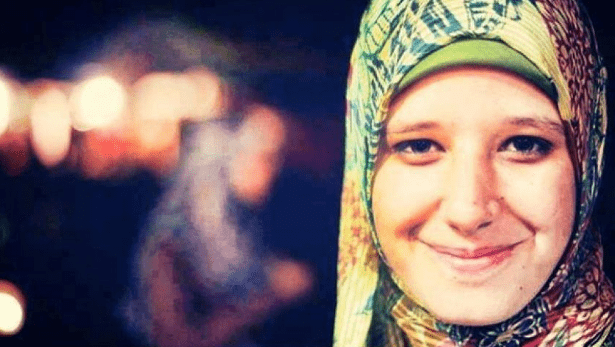 “Martyrdom does not hold oppression back from people’s lives and properties, but it denies oppressors control over people’s souls. In fact, the memory of the martyrs keeps haunting the oppressors. People surrender to the power of tyranny, but they do not submit their souls to it. This is the legacy of humanity and what is handed down from one generation to another beyond history books,” AsmaaBeltagi on her Facebook page, May 2012.

Words that seemed older than this young girl’s age at that time:Asmaa, the lone minor girl aboard Marmara ship which headed to break the siege on Gaza (the Freedom Flotilla); the young girl with the more prominent presence among the protestors at Muhammad Mahmoud; and the more renowned teenager among the martyrs of the massacre of Rabaa sit-in dispersal.

Asmaa’s life, however, came to an end while she was still ‘a minor’. Before she even turned 17, the Egyptian army’s bullets took her life from among thousands peacefully protesting in defence of constitutional legitimacy in the morning of August 14, 2013. Over 1000 Egyptians were killed by the guns of the army and police forces in the besieged square.

In January, 1996, Asmaa was born to a family immersed in political struggle. Her father, Dr. Muhammad Beltagi, was one of the most prominent figures in the political opposition to the Egyptian regime of deposed president Hosni Mubarak and one of the most important leaders of the January 25 Revolution, which ended the rule of Mubarak’s family after 30 years of corruption. Asmaa was the only daughter along with two sons, Ammar and Anas.

Asmaa was ahead of her young age concerning her inspiring writings and rich contributions on all the country’s political incidents and circumstances. Her activities even extended to important international events, most notably her participation in the Marmara ship’s bid to break the siege on Gaza, May 2010.

Asmaa witnessed all the events of the revolution. In November of the revolution’s first year, her scene on Muhammad Mahmoud Street, with white sprinkles on her face trying to neutralize the effect of tear gas, remains a landmark in the documentation of this event. That day Asmaa wrote, “From Tahrir Square: O Lord, You know that these hearts have gathered for Your revolution and have pledged to establish a state of justice. O Allah, strengthen their bond, guide their steps, and fill them with Your never-fading light!”

In September the same year, Asmaa took part in a sit-in before the Zionist embassy in Cairo. On her Facebook page she wrote, “Tahrir, the Supreme Court, and the Israeli embassy! A day that has been a success to a great extent, thank God.”

Asmaa joined Rabaademonstrationsat the start of the sit-in and documented her participation in the last post on her page following the Presidential Guards massacre, July 8, 2013. She said, “They woke us up during the night and killed us as we prayed. They are lowly and less in number. Call on the servants of Allah to come to our aid, like an unstoppable wave.” These words echoed a similar call issued by a Companion who sought help from Prophet Muhammad, peace be upon him, against the treacherous Quraysh before the Liberation of Makkah (Fat-h Makkah).

During the very brutal operation of the Rabaa sit-in dispersal, regarded by some international organizations as one of the most horrible mass murders in modern history, Asmaa was destined to meet a treacherous bullet that hit and settled in her chest. She breathed her last and her soul rose up to the Creator, rising to boundless immorality, to complain to Him about the oppression she had suffered.

About her martyrdom, AsmaaShehata, who accompanied AsmaaBeltagi in her last moments, said, “I met Asmaa, may Allah have mercy upon her, as she was at the door of Rabaa Mosque overlooking Nasr Road. She was collecting bricks in a white bucket. I joined her and when the bucket was full, I took hold of its handle to carry it. At that moment, Asmaa looked at me in the eye and smiled, letting me carry it on her behalf. I moved forward with the bucket.”

Shehata continued her testimony on her personal page, saying, “All of a sudden, volleys of bullets were fired at us. I came back and did not find Asmaa. Suddenly, I heard Sara scream and say, ‘AsmaaBeltagi!’

“I saw Asmaa, with a face as bright as the moon. She was martyred, not wounded. Her face was white and cold.”

She was buried in her hometown, Alexandria, and her father could not attend the funeral because he was wanted by the coup police, who would not have hesitated to detain him at his daughter’s funeral; ferocious revenge was the slogan of the coup army in its savage battle against the defenders of constitutional legitimacy.

Apologizing to his daughter, Beltagi wrote on his Facebook page, “It is very painful to have not been able to say the last farewell to you, nor have a final look at you, give a last kiss on your forehead, and be honoured to lead the prayer over you. By Allah, my sweetheart, I did not do that because of fear of death or prison, but out of keenness to complete the mission for which you have given your life; that is, to continue the journey of the revolution until it triumphs and achieves its goals.”

The grief and weeping of Turkish President RecepTayyip Erdogan was very remarkable. As he was participating in the closing ceremony of a summer camp program organized by the Turkish Directorate of Religious Affairs for the students of south and south-east Turkey which was held in Istanbul, he shed tears after watching a video clip showing Beltagi’s elegy about his daughter, according to the Turkish newspaper Star.

Lamenting her death, Erdogan said, “Martyrdom is unique. Asmaa departed the world before she could even have enough of it. But her soul rose up high. I hope that her father’s attitude will be a lesson for all Muslims worldwide. I am not speaking to you now as the prime minister, but as the citizen RecepTayyip Erdogan.”

Asmaa went up to heaven as if she returned to her first home and as though her short journey amongst us was nothing but a passing visit to the cold world of humankind, or as a page, launched by some of her friends after her death, put it, “Angels only deserve to live in Paradise. Such was Asmaa: an angel walking the earth.”